This article covers all the process of marking GCP's on images.  This is needed for all flight instances that were marked as needing manual GCP's at upload time.  After the upload and the  the link process are done, the site will appear as “Pending GCP Marking” in the site map screen left banner as shown in the figure below.

The next step here would be to open the flight by clicking on the "Pending GCP Marking" right on the site tab shown above or by opening the site and then opening the flight instance.

The figure below shows that the flight is in GCP Marking step and now it is possible to start the process. 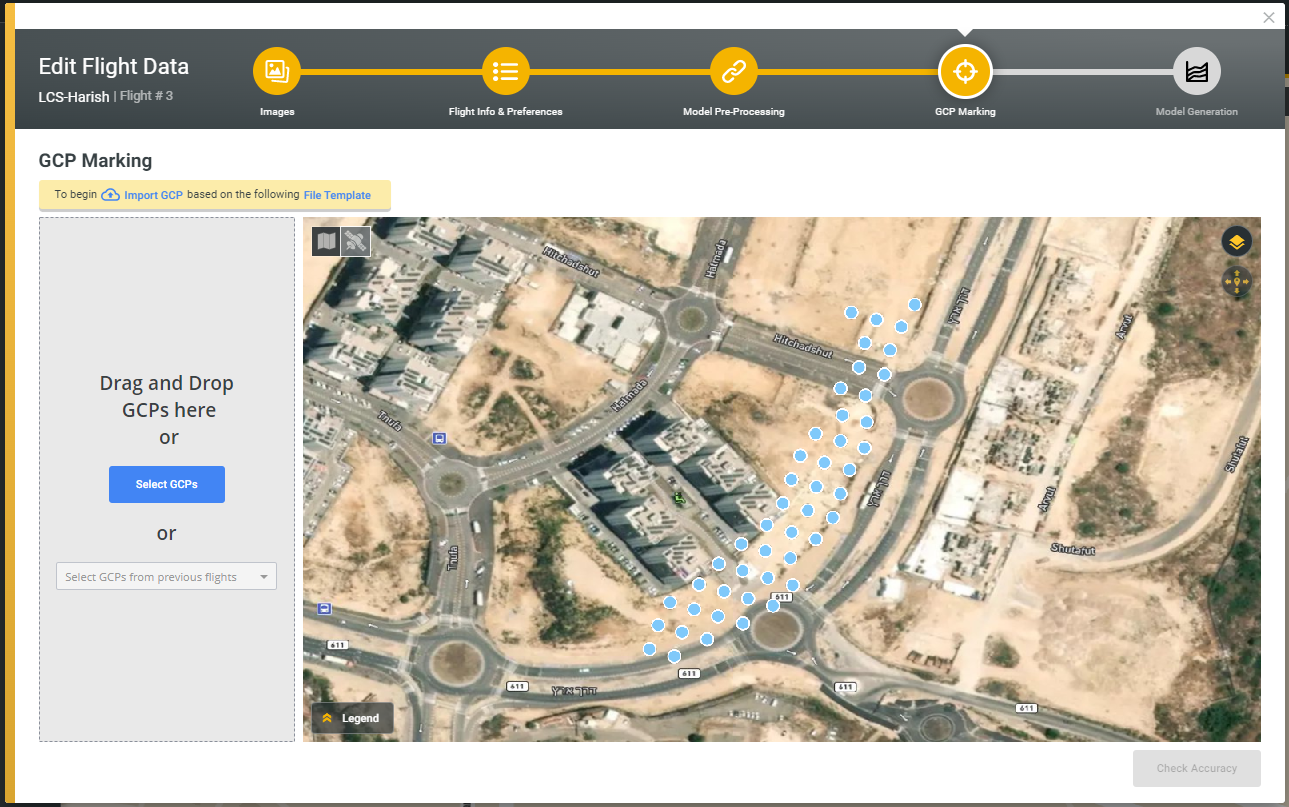 Firstly, you must import the GCP file based on a specific template that can be downloaded and viewed by clicking on “File Template”.   GCP file has to be in CSV format and must have a heading row as shown in the example below.  The order of the columns in not important, but the heading of each column must exactly match what is shown below.

To download a template GCP file, press the File Template link shown above the left panel, and this will download gcp_template.csv into your standard download folder.  Or alternatively, you may download it from the attachments at the end of this article.

To import a GCP's file, use one of the 3 options shown below as follows: 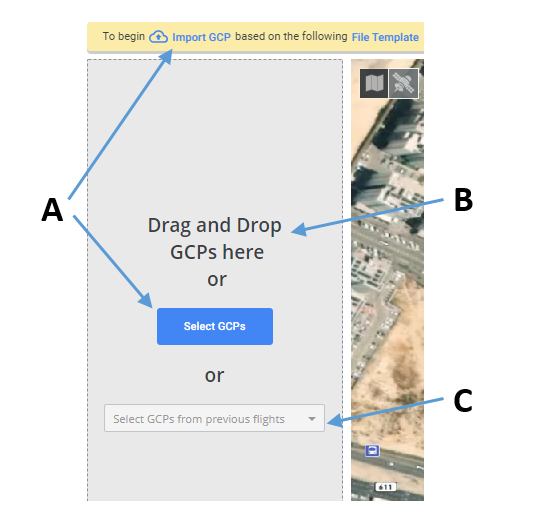 A:  Click on the “Import GCP” link available on the top left corner of the window, or on the "Select GCP's" button.  In both cases a file browser is opened allowing you to browse and select the desired file and open it.
B: Open a file browser and find the desired GCP's file and simply drag it and drop it where it says "Drag and Drop GCPs here". or
C: Import GCP's from a previous flight by selecting the flight date from the available drop-down field shown.   This option appears only when there are previous flight with GCP's that are available for importing.
As soon as a GCP file is imported or opened, the system will show the message below indicating that it is attempting to generate hints for the loaded GCP’s. 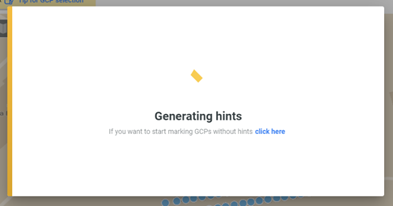 Generating the hints may take several minutes depending on the size of the flight.  You can wait for the hint generation process to finish, or you can cancel out and start marking points. The initial hint generation after loading the GCP file does not always work.  This is due to drone elevation issues that are out of our control.   The figure below shows the screen when no hints are found.

In all cases, it is possible to start marking GCP in images.  The recommendation is to mark only 3 points on two images each (or 3 images each when using local coordinate system), and then check accuracy.   This will drastically improve the location of the hints.   When hints are found the list on the left shows the number of images in which the hints were found as shown below.

Under some conditions you may experience a shift between the location of the images and the location of the GCP’s as shown below.  This will most likely happen when you use a local coordinate system.  Please refer to the article Tips and Tricks for Using Local Coordinate System (LCS) for more details. It may also happen when the is no perfectly matching coordinate system available. 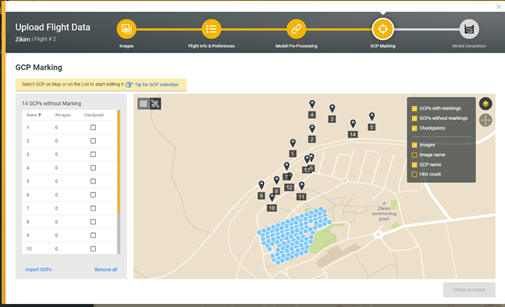 In this condition you may use the GCP manual moving option available to align the GCP’s with the images.  This will improve the close-by image prediction for each GCP, hence it will speed up the GCP marking process.  Below is a detailed explanation of all the alignment possibilities. 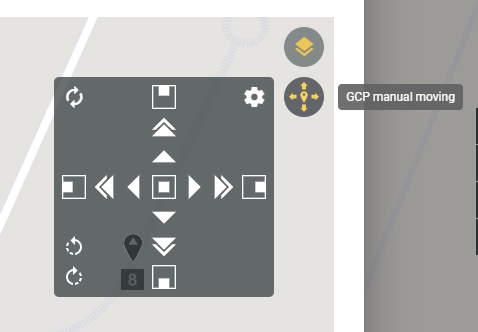 The alignment tool allows for quick alignment as follows:

The alignment tool also allows for moving the GCP's to the north, south, west, or east by a distance as follows:

Using the Settings tool on the top right, set the major step and minor step of the manual movement. 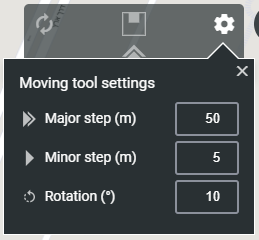 Use the single arrow (

) to move the GCP's by the major step

Finally, the alignment tool allows for rotating the GCP's by a X degrees that can also by set in the settings tool shown above.

Once ready to start marking, it is recommended that the first 3 or 4 points you mark should be well distributed and far from each other.  See illustration below as an example.

To mark a GCP on images, you can click on it on the map or in the list.   Clicking on a GCP will show the screen below. 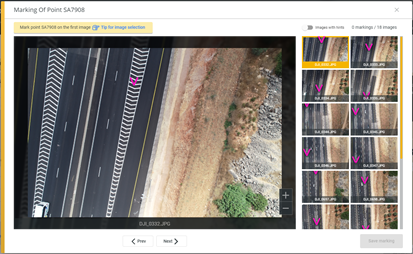 Even if there were no hints, the system shows close by images on the right side, and shows the closest images in X, Y coordinates on the main view.   To mark the selected GCP in the first image, simply zoom in to find the mark and mark it very precisely in the center of the mark with a left mouse click. 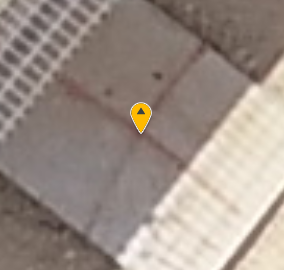 Repeat the process on another image, by selecting it from the images on the right side.  It is recommended to select an image that is far from the first one.  Once you mark the point in two images click on the “Update Marking” button on the bottom right.  This will take you back to the map screen showing you a list of GCP’s that were marked, and a list of GCP’s that are still without marking as shown below.

Repeat the marking process for two additional GCP's.  Which will bring you to the screen below.  It is always possible to show or hide information by selects or unselecting it from the legend on the top right.  Additionally, it is possible to hide or show the whole legend as needed.

You may also here mark any of the GCP's as check points by checking the available CheckPoint check box next to it.  Please refer to the Using Check Points article for full details.

At this point, which is the minimal requirement that allows checking the accuracy; you may click on the “Check Accuracy” button on the bottom right. This will start the process of checking the marking accuracy and the generation of new hints for all GCP’s. The process may take several minutes depending on the size of the flight. 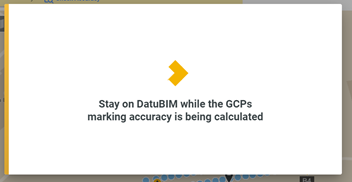 Once done, the screen below appears showing the accuracy of the GCP marks in meters (or the flight unit if different), and in pixels for each image. It also changes the color of GCP's that were marked to yellow on the map giving a clear indication of what is marked and what is not.

To continue marking the rest of the GCP’s, click on “Mark additional GCP” to show the list of GCP's that were not marked yet.  In the GCP's Marking accuracy list it will show the GCP Name, the number (#Images) of images in which the GCP can be marked in; hence images with hints, the number of images (#Marks) the GCP was marked in, the marking residual in distance (Diff), and the marking Residual in X, Y, and Z (Res. E, N, H)).

While the list of GCP's without marking shows the Name of the GCP and the number of images with hints.

It is possible at this point to start marking GCPs in more images by selecting the GCP from either list or from the map.  To mark a GCP click on it in the list or on the map and mark it in at least four images that are well distributed.  Once done marking, press the “Update Marking” on the bottom right to save marking and go back to the prior screen. 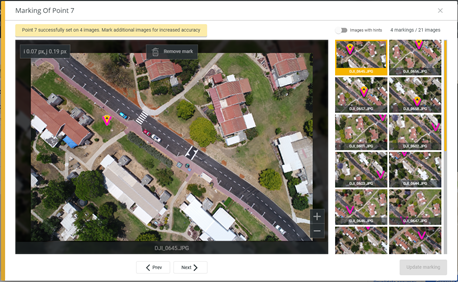 At this point, you need to mark as many GCP's as you want.  Once done marking as shown below, press the “Revalidate Accuracy” button and wait for new accuracy residuals.   If residuals are high, check your markings to make sure you marked the correct places.  Adjust and revalidate until you get good residuals.  Then move to the final step of generating the model.

At any time you may turn on or off GCP display layers as shown below to help you better visualize results. 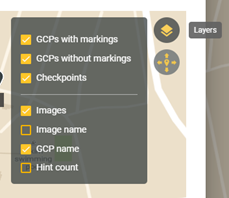