All measurement, analytics, and annotation objects can be modified after created.  Any change made to an object must be saved before editing the next object.  Moving to different object without saving behaves like a cancel of changes on the first object.

Single-point objects, such as annotations and elevation points shown in the figure below, can be dragged to a different location as described. 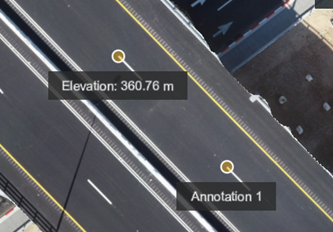 Multi point objects are objects that consist of two or more points, meaning polylines and polygons.  In other word, they consist of vertices and line segments.
Except for angle measurements, editing all multi line objects is done the same and will be described below.  Editing angles is similar to editing single point objects as the number of vertices in it is always three, and it is possible only to change the location of those three vertices.  When any of the vertices is moved, the result is immediately calculated and shown in the details box and the user will have the option to save or cancel the changes to revert to the original place.
To edit any other multi line object follow the steps below.